Okay, so I’m Asian, and suppose I’m with two other people, A and B, of which at least A is White.

Suppose A says “Wow, there’s lots of Asians around here”. Then B stares at A and subsequently tells A that is racist.

If you’re A, you have not done anything that will cause me to want to distance myself from you. You were just remarking that there seems to be a high quantity of Asians in the vicinity. It’s not like you’re saying or even implying something prejudiced about Asians. I saw no racism in that statement, and I wouldn’t even have contemplated the possibility until B decided to remark on it.

If you’re B, then you have signaled to me that you heard that utterance and saw racism in it where I still do not see racism after your remark. You have somewhat persuaded me that I should distance myself from you, because if you heard that and decided there’s malice in it, then I don’t want to be around you, because even though I’m in the demographic you’re happening to believe to protect at the present, I’m sure somewhere down the road I’m bound to make a statement I think is innocent but that you will judge me as malicious for, given that you saw this in that statement.

I made an attempt at depicting the southern half of Cambridge, MA in a map showing territorial control in Ingress, pointing out areas well controlled by one faction, like Cambridgeport (an Enlightened stronghold) and West MIT (a Resistance stronghold), also highlighting fronts and battlegrounds where control frequently shifts and action is relatively fast. 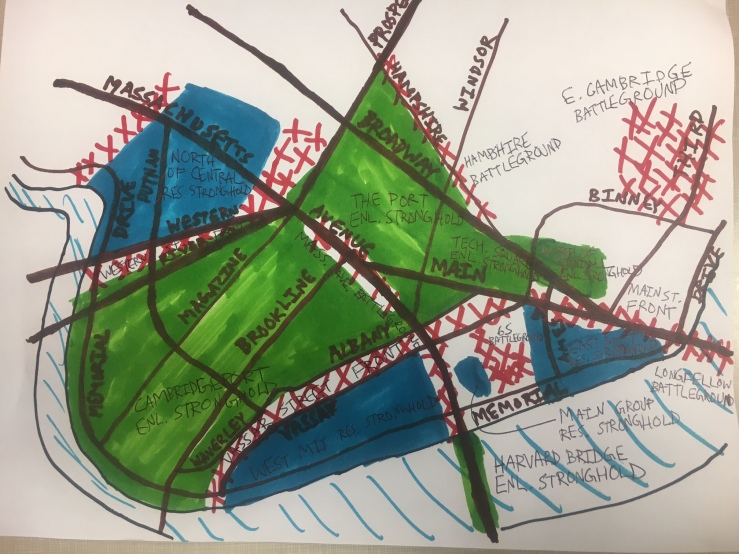 Well, in my head it was a lot cooler than it turned out. Perhaps with symbols crafted with more nuance this could look more like a battle map.

I am willing to hear, with a guarantee of non-counteraction, the opinions and thoughts of anyone with perceived uncommon or unpopular opinions, or opinions that one fears garners significant societal judgment or ostracization upon expression, either in the global scene or in the particular specific communities one is a member of. I consider this important both for the spirit of understanding and open-mindedness, and believe that it is both healthy and intellectually useful to be exposed to a wide swath of thoughts and perspectives.

I will respond with such a request with either an acceptance of discussion or a response that I do not actually believe your opinion is a minority or unpopular opinion within your stated context. If the community of context that you mention is one I’m unfamiliar with, I may default to the latter. I also may listen to opinions that aren’t minority and unpopular opinions; I’m only saying I *might* decline.

This is an opportunity for the honest and well-intended exchange of thoughts, and people, like me, do not have enough time to take conversation to full rigorosity of analysis. If you manage to give me the impression that you are a troll and are using this as an opportunity to troll, thus wasting my time, I may become wholly uninterested in discussion with you. Although I cannot well-define what makes me categorize you as a troll, actions that suggest the stuff may include repeatedly bringing up already-discussed material, resorting to arguments on aspects clearly irrelevant to the conversation at hand, or being oppositional when from other contexts you are clearly not actually of such an opinion. It is okay to play Devil’s Advocate, and I’d in fact encourage doing so, but make it clear that you are.

As some of you may know, I am (at the present) not a vegetarian.

As some of you may also know, I tried being vegan once about four years ago, and stayed so for about two months, and then backed off to some alternation of being vegetarian and being vegan most days for a few more months after. Then I reverted to my normal dietary state.

I do wish to contribute a part to keeping the planet a healthy nice, place, and eating less meat is one of the best things an individual can do.

The problem is that my appetite is enormous.

Some of you that know me in the physical world may know a restaurant around here called The Friendly Toast. A lot of people call that a place to get a large meal. Yeah, I was really surprised when I first heard people say that. Most meals from The Friendly Toast don’t make me full. If I don’t have part of an appetizer, I’ll usually go also eat something else afterwards.

One serving of Soylent does not make a meal for me. It’ll last two hours before I get hungry again. I need two Soylents when I don’t feel particularly hungry, three if I am hungry. One Soylent is a snack.

And in particular, I’ve found that it takes a lot of vegetables to be able to add up to the amount that meat is able to make me full, and thus find it quite hard to sustain vegetarianism or veganism for too many meals in a row.

At meals, I will be as vegetarian as the most vegetarian person I’m eating with at that meal.*

As such, I will both average out to eating less meat than normally while also not engaging the level of eating I’ll need to sustain full-on vegetarianism, and also contribute to possible additional comfort for vegetarians and vegans in groups.

*I’m not going to be vegetarian if the only vegetarian options involve asparagus or mushrooms.

This post is now a page, as of 72CL 10.07. Updates since that date will only manifest on the page, linked here. The below, unlike the page at that link, is not up to date.

4. Wins Involving Capturing All 7 Other Players in 8-Player FFA

Achieved by 0xGG, in 285 turns, though with three AFK players

5. Wins after Long AFKs (or otherwise Periods of No Movement)

See also: THE MOST GLORIOUS GAME OF GENERALS.IO EVER

END_OF_DOCUMENT_TOKEN_TO_BE_REPLACED

In a recent referendum, Mauritania voted to add red stripes to their yellow-and-green flag. This means Mauritania has joined the vast majority of countries that have decided that red should be one of the colors on their flag. How vast is this majority? This vast.

No other general category of color (green, yellow, white, etc.) comes close to red’s dominance in prevalence among countries’ flags. A lot of nations find important symbolism in the color red, often representing the blood of those that have died for their country, revolution, courage, or valor, among other meanings.

In fact, if you look at the map above, you’d find that among countries with at least one land border, you cannot avoid either the country you’re in or a country you border having red in their flag if you include maroon as a red. If you exclude maroon, you can achieve this in Uruguay or Qatar.

Note that I have colored non-sovereign countries or territories in the map above according to the flag of the sovereign country that owns the land. If one considers the flags of these regions instead, there will be a few additional instances of flags without red, like Curaçao, Tokelau, and Macau.